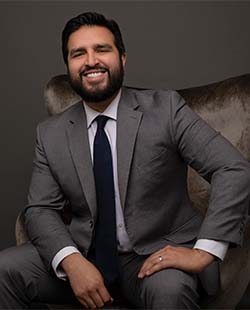 Luis Baez is an experienced trial attorney and courtroom advocate. Born and raised in Houston, Texas, Luis focuses his criminal defense and personal injury practice in Harris and surrounding counties.

Prior to joining The Webb Firm, P.C., Luis was a felony-level prosecutor at the Montgomery County District Attorney’s Office where he was responsible for prosecuting serious felony offenses like aggravated assault, manufacture and delivery of controlled substances, and cases involving physical and sexual abuse of children. From the early stages of a criminal investigation all the way through trial or sentencing, Luis knows the ins and outs of the life of every type of criminal case.

He was also a part of the District Attorney’s “Vehicular Crimes” division where he investigated and prosecuted intoxication assault and intoxication manslaughter cases involving dangerous combinations of motor vehicles, drugs or alcohol use, and serious bodily injury or death. During his time with the District Attorney’s office, he was able to try over 30 cases in front of either judge or jury. He also spent time training and teaching newer prosecutors the skills necessary to ethically prosecute misdemeanor cases, including driving while intoxicated and domestic abuse cases.

Luis also has significant experience litigating different types of civil cases. His first job after graduating law school from Michigan State University in 2014 was at a law firm in Houston, Texas. While there, he represented both plaintiffs and defendants in commercial litigation cases and employment-related claims in both state and federal court. He also represented victims in personal injury cases involving workplace injuries and injuries caused commercial vehicles like delivery trucks and 18-wheelers. He also has trial experience when it comes to personal injury cases and plaintiffs’ work.

Luis discovered his passion for the courtroom and advocacy while he was a high-school student at J. Frank Dobie in the Houston area. He was a member of the speech and debate team and also became the national president of the Health Occupations Students of America. In undergrad at Texas State University, Luis was the president of the speech and debate team, competed in debate tournaments across the country, and was selected to attend an annual debate tournament at Oxford University in Oxford, England.

During law school, Luis continued to work on his advocacy with the mock trial team and his research and writing skills as an articles editor with the Michigan State Law Review. He also was a teaching assistant for Professor Adam Candeub’s Administrative Law course. He has had several articles published in different academic journals and has also written legal articles related to competitive e-sports and the trading card industry.

As an attorney with The Webb Firm, P.C., Luis works to zealously represent his clients charged with criminal offenses and clients who have been injured or wronged through the negligence or fraud of others. He is an active member of the Montgomery County and Harris County Criminal Defense Lawyer’s Association and the Texas Trial Lawyers Association.