Home > Blog > Charged with a white-collar crime? You need a lawyer.

Charged with a white-collar crime? You need a lawyer. 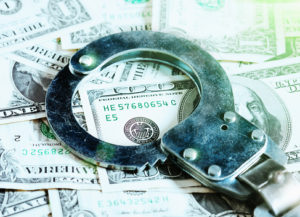 If you are under investigation or facing charges for a white-collar crime, the consequences can be severe. It’s important to refrain from answering any questions posed by investigators and to contact a criminal defense attorney as soon as possible.

Purposely falsifying information on a tax return, not filing a tax return, or willfully failing to make tax payments constitutes a tax fraud or tax evasion. It applies to both state and federal taxes and carries severe consequences:

Embezzlement involves unlawful misappropriation or theft of assets belonging to a company. In Texas, the severity of an embezzlement charge depends on the value of embezzled assets. This crime also constitutes theft in Texas. The penalties include:

Bribery involves offering assets or blackmailing individuals in order to influence public officials, private corporations, or members of a jury.

Penalties for bribery depend on who the crime has been committed against. In Texas, bribery can result in a felony of the second degree, which carries up to 20 years in prison, a fine up to $10,000, or both.

Being found guilty of a white-collar crime can have lifelong consequences. It can destroy your career, business, and reputation.

Those suspected of white-collar crimes are often placed under an initial investigation. Investigators may extract evidence by viewing documents, speaking to witnesses, and even probing you for intent. The more you tell investigators, the more evidence they will have to use against you in court.

If you have been accused of white-collar crime, the best thing you can do is remain silent and speak to an experienced Texas criminal defense attorney.

The legal team at The Webb Firm, P.C. will review the details of your case and work tirelessly to build a strong defense. To learn more, contact us today.